All 23C III-XL enlargers are built around the extra long and rigid twin girder construction which helps reduce vibrations while allowing print sizes larger than 16″x20″ on the baseboard. A rack and pinion carriage elevation system provides exceptionally smooth magnification adjustments while the positive locking mechanism assures that magnification settings do not shift during the focus exposure. The modular design includes a number of system features. These features include more precise alignment of the negative and lens stages for greater optical performance, a tilting projection assembly for wall projections, a distortion correcting lens stage, a below the lens filter holder which accommodates variable contrast or special filters, and a smooth friction drive focus assembly which allows for left or right handed control.

All 23C III-XL lamp houses accept formats up to and including 6x9cm and have ample space on the sturdy 16″x25½” white laminated baseboard. 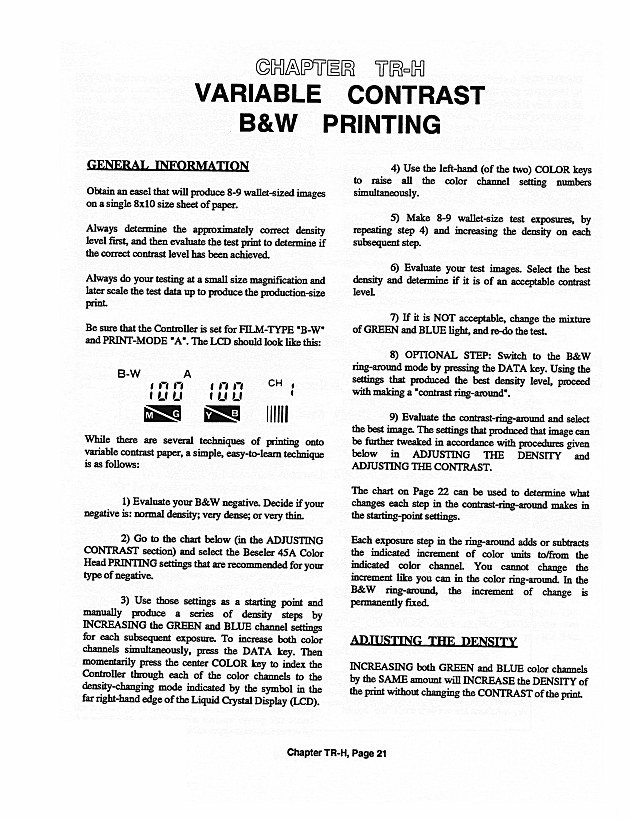 The 45 MXT motorized chassis provides a sturdy foundation for this enlarging system. The enlarger chassis has a triangular reinforced truss with twin girder frame which permits the enlarger to produce prints greater than 16″x20″ on the baseboard from 35mm film. 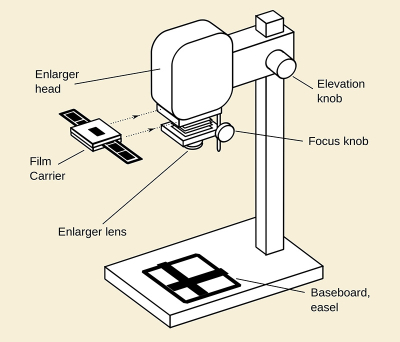 The 45 V-XL sets the standard for professional laboratory use offering faster operation, greater productivity, increased efficiency, and unprecedented versatility in a large format enlarger. Its massive twin E-Channel with center-braced and vertical column assures that the center of the projected image remains stationary when changing image magnification. Thus, there is no need to reposition the enlarging easel, especially important with roll easel users. The extra long column permits enlargements greater than 24x on the baseboard from 35mm film with a 50mm lens.

The 45V-XL accepts the Beseler 3 lens turret, all the 45 series light sources and lensboards, and film carriers.

The enlarger’s single column emulates the braced, twin channel design found in Beseler’s “top of the line” 45 VXL and assures solid support at the highest magnifications. The column allows prints as large as 16″x20″ to be made on the baseboard from 35mm negatives and a 50mm lens. A built in swivel allows the projection assembly to rotate making wall projection easy.

These enlargers are a fine example of the extra measure of craftsmanship and performance which have characterized Beseler products for over 140 years.

The Cadet®II is ideally suited for both beginners and experienced amateur 35mm photographers. It’s compact, lightweight design, plus ease of assembly, setup, and storage offers the perfect solution for the temporary or traveling darkroom. The Cadet®II comes equipped and ready for use, complete with a 35mm negative/slide carrier, a filter drawer for 3″x3″ color or variable contrast printing filters, 2¼” optional glass condenser, a 14¼”x11¾” white laminated baseboard for enlargements up to 8″x10″ and our new four element 50mm lens. The reversible column allows for floor projection and larger magnifications. The column features a counter-balanced elevation control as well as an elevation scale for speedy printing size.

The Printmaker 35 is an excellent choice for those who are using the 35mm format while the 67 is equipped to handle from 35mm up to 6×7 cm formats. The Printmaker now performs better than ever. The Printmaker’s compact size makes it perfect for small darkrooms, temporary darkrooms, or portable darkrooms. It can produce prints up to 11″x14″ on the baseboard or much larger when reversing the column and projecting on the floor. Additional features include a focus knob, which can be attached for either left or right handed use, a built in elevation scale, and a below the lens filter holder.