Fleetwood Folding Trailers (FFT), which was then selling pop ups under the brand name Coleman introduced the ABS (plastic) roof in the 1996 model year. During the early years of introduction the ABS roof was included on almost all Coleman Pop Ups.
FFT manufactured the ABS roofs themselves in their Pennsylvania assembly facility. It was soon found that some roofs began to sag for unknown reasons. The first thought was that the A/C unit caused it and they had dealers retrofit the roofs of pop ups equipped with A/C installed units with a metal bar inside the camper to provide additional support. This bar was added as a regular item to ALL pop ups manufactured sometime in 1998 and a retrofit kit was made available for all older units. The absence or presence of a bar in a pop up does not denote a 'new' roof.
They continued having problems and other factors were investigated, such as exposure to heat. It appeared that pop ups in warmer climates experienced a greater number of sag cases than cooler climates. FFT tried different formulations of ABS plastic but roofs continued to sag. Additionally, the problem appeared more in 12 foot box pop ups than in 10 foot boxes.
The final cause (as well as anyone can like us can figure out) is that roofs manufactured under certain climatic conditions (temperature and humidity) did not allow the ABS plastic to cure properly. It was these roofs that eventually sagged. The number I hear thrown about is that 10% of the ABS roofs manufactured were bad. I think this number is a little high, but who is to know other than FFT.
Sometime around 1999/2000 Coleman finally stopped making the roofs themselves and began buying ABS roofs from an outside vendor. At his point the the sagging problem seems to have lessened to a degree or disappeared. Now those roofs being supplied by the outside vendor began to exhibit other problems, which have been chronicled on internet forums.

They include:
Delamination: Part of the ABS plastic delaminates from the core of the roof and a blister forms on the surface.
Bowing of front & back seal: The seal area of the front and back portion of the roof, where it contacts the box in the down (or travel position) bows up sufficiently to allow water penetration during driving in rain. This condition appears to go away after 24 to 48 hours sitting in the down position. Some believe that the shepherds hook used to push out the bed end canvas pushes up into the seal during use and bends it out of shape. At least 2 different styles of seals/gaskets were introduced in an attempt to correct this problem.
Both of these problems appear to be limited to a small number of roofs.
In 2003 the vendor FFT was buying the roofs from went out of business. At that point FFT began enforcing the letter of the written warranty. The roof warranty is detailed on the following table:
Year Fleetwood Pays - 1996 Parts and freight are paid years 3+ of ownership Labor after year 2
Owner Pays - 1997 Parts and labor are paid years 3+ of ownership Shipping after year 2
Second and subsequent owners do not have the protection of a warranty. In the past some have reported that FFT seems to be working with these owners to find a solution. The most common solution that has posted here is that FFT will supply a new roof to a FFT dealer if the owner will pay shipping and labor for the installation. They will not ship one to an owner for self installation. Parts prices for the roof itself have been posted at between $1,200 and $2,000 with shipping and labor running between $700 and $900. I have not heard about anyone getting this deal after FFT began enforcing the warranty.
Starting the 2003 1/2 model year, Coleman is phased out the ABS roof and replaced it with the new AlumiTite Krystal Kote Composite Roofs for the GT and GTEs. The AlumiTite Krystal Kote Composite Roof didn't last long either, and has been replaced as well.
Now, I get a lot of e-mails from folks asking about 'fixing' their roof. I'm sorry to say, if you have a severe sag or your sides are bowing out fixing it may be out of the question. But, if you have a few small cracks you may be able to take care of it yourself.
First of all, should you attempt to do this remember, you decided to do it and you are on your own. I do not guarantee anything. It's up to you. Secondly, the repair should be done in a well ventilated area. The things you are going to be working with PVC/ABS glue and MEK are toxic solvents and are probably not real good for your lungs. As always, wear clothing to protect your skin and safety glasses/goggles.
The best ABS crack repair you can do is with MEK (MethylEthylKetone) and ABS powder or chips. MEK can be found at most hardware stores as PVC/ABS glue, and it will melt ABS plastic given sufficient time. While ABS plastic can usually be found at hardware/home improvement store store in the PVC area, it is usually black. You could also stop by a FFT dealer as they may have damaged roof and wall panels lying out back that they may give you a piece of.
1. Drill the end(s) of any cracks to reduce the stress and keep it from cracking further. It doesn't have to be a big hole, just sufficient size to round out the end of the crack and stop the stress at the 'pointy' end of the crack.
2. Rough up the ABS around the crack and clean it with ABS/PVC cleaning solvent.
3. Grind up the ABS plastic you have by whatever method you may have , the smaller the better. Mix about equal parts MEK and the ABS you ground up in a glass jar (with a lid). Let this mixture sit for a few minutes , then open the jar and stir the mixture. Repeat until you have a 'slurry' or 'goo' of melted ABS plastic.
4. You can now use the slurry of ABS to fill the cracks with. This slurry should have sufficient MEK in it to melt your slurry to the roof, sealing the cracks. Work quickly as it dries quickly. Also, be careful about letting the slurry or ABS/PVC cleaning solvent drip/run down the side of the roof as it can melt/stain the good areas of your roof.
Coleman ABS Top Repair Directions
Article courtesy of Natasha's Camping Site

Are you having issues with your Coleman pop up camper battery not Trying also to understand the 'Electrical Center/Power Converter'. There is power harness to connect to the towing vehicle and another pair of separate wires.

.. a dead circuit on a 97 fleetwood (coleman) popup camper.

all exterior driving. Install Watt Inverter and wire into existing v harness . and have no plans to run camper wiring in the rear I would not pull the back. 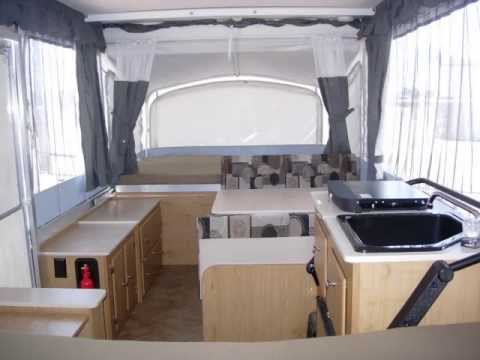 They help with general setup, operation, and towing of the camper. Parts books can be found here All Models All Models Pioneer and. I have a Coleman Santa Fe popup camper.

We took it out this weekend for the sometimes a wire comes off, and sometimes the switch goes bad. There should be a fuse box that is part of the power converter if that approach fails.

During cold weather start-up, 10° For less (outside ambient air temperature), a +12 volt output delay will occur. Allow the converter to warm-up once plugged into the volt park supply for three to five minutes before applying a load to any + 12 volt circuit.

for the set-up and take-down instructions does not differentiate between models. When the text does not apply to your model, continue to the next applicable step.

Set up and take down the trailer per the insfiuctions several times to familiarize yourself completely with the procedure and to prevent unintentional damage to the equipment. 1.Coleman Pop Up Camper Wiring Diagram - Detailed Wiring DiagramsHow do I Troubleshoot a Coleman Camper Electrical System? Gone Outdoors Your Adventure Awaits