A: The hybrid target system is unlikely unless the netboot image can find its matching kernel online. If the netboot installer seeks an old kernel version which is no longer available in the repository, it will fail.Ryan Stonecipher-Fisher. 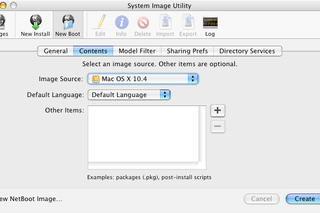 What you are showing is not really an error. All we are seeing in the bootp/dhcp exchange between the client and the server (your netboot server is obviously also the dhcp server). The real way to tell what is going wrong is to boot the workstation into verbose mode. The error is manifesting on the client, not on the server. Let's assume that you've created a valid netboot image (I know, large assumption). If the image is valid, then there is a problem with the client system, perhaps the build or specific driver support. Try this...
1: Boot the macbook holding down the N key
2: As soon as you see the system acquire the server, hold down the V key for verbose logging
3: When the system kernel panics, with luck, you will see the reason why
Since you are booting from a locked volume, there will be no way to record the kernel panic as with normal panics. This is likely the only way to gather information.
Side questions... What hardware did you build the boot image on? How did you capture it? Can you boot from other hardware with the same image? You are not trying to do this over wireless, right?
Hope this helps.