Mio C220 / C250 Unlock. In short: Place Mio C220 / C250 Pseudo Unlock (4.2 MiB) on a SD Card. Insert the Card while the device is running. A file-manager will start. Backup your 'MioMap' Folder which is inside 'My Flash Drive'. Delete the folder 'MioMap' inside 'My Flash Drive'. Run 'Setup.exe' on. My unlocked mio c220 Gps. Recover Files from Formatted hard disk Recover Files from Formatted hard disk - easily with the Recovery software, Recommended by Microsoft(R) corp. This program can recover files from formatted hard disk drives of any model: IBM, Western Digital, Hitachi, Seagate, Samsung and many others. Mio Transfer Hack for C220, C250 and unlock for Mio C250 C220?: For a lot of actions described on this site you might need Mio Transfer Hack. I think this program is an essential asset for altering / adding / deleting and copying files on your device. Install Mio Transfer on your PC. It is on your DVD.

Your Mio device is in fact a PDA, which has been crippled by Mitac to a so called PNA or PND.

A PDA stands for Personal Digital Assistant, a handheld device that was originally designed as personal organizer. PDAs have many uses: calculating, use as a clock and calender, playing computer games, accessing the net, sending and receiving e-mail, use as a radio or stereo, video recording, recording notes, use as an address book, GPS and use as a spreadsheet. 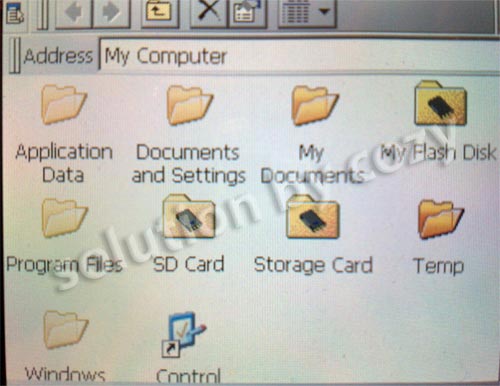 To get a PNA to behave like a PDA you will have to unlock its full potential. For this you must be able to access the Windows operating system.

I, myself, still have not unlocked my device. Why? I don't really need the PDA possibilities.

If need be i do a temporary or semi-unlock. This can be activated on a C310 / C510 / C710 by doing a softreset and then while starting keeping the two middle buttons pushed simultaneously on the right side of your device. You will then have access to the windows ce desktop. You will get a message on copying map files, first. Press NO! After that you might get a message about your storage card. Press the red cross. Now you're all set.

When you are done and want to close the CE environment completely you must do a hard reset. Everything will be back to normal.

Then why this unlock page? Obviously, there are always people who want more, others who want to push their device to the limit or some even do it for the kick.

Because it is possible and it is part of interest to a lot of mio users i write about it here.

I will describe 3 ways of several unlock methods used on the net. For other methods i refer you to the links on the right.

When WinCE has restarted you will see all the new icons.

By starting the C310auto shortcut you can perform the actions which are summed up before.

You can now start your application cab's, which you have copied into Storage CardAppsCABs earlier

You are all set.

You can now use activesync or install another MP3 player, alter your CE desktop, install and play games and all the other stuff you like to do.

Method 3 - The PrinceR version - Dutch only

Make a copy of miomap.exe and copy this temporarily to your pc. Location: My Flash DiskMIOMAPMioMap

You can do this by using MioTransfer Hack or Bluetooth.

You have to be an active member with more than 6 posts in order to access the topic / file. So if you're not a member yet register first. You will not be disappointed for this is a very good and active forum on Mio topics. Unfortunately, the site is completely Dutch!

So if you don't speak any Dutch i advise you to use method 1.

You are all set.

Mio GPS drivers are tiny programs that enable your GPS hardware to communicate with your operating system software. Maintaining updated Mio GPS software prevents crashes and maximizes hardware and system performance. Using outdated or corrupt Mio GPS drivers can cause system errors, crashes, and cause your computer or hardware to fail. Furthermore, installing the wrong Mio drivers can make these problems even worse.

Recommendation: If you are inexperienced with updating Mio device drivers manually, we highly recommend downloading the Mio GPS Driver Utility. This tool will download and update the correct Mio GPS driver versions automatically, protecting you against installing the wrong GPS drivers.